Fraser Nimmo is a Scottish singer, songwriter and actor who combines traditional songs with his own material in an organic melange of Celtic musicality.

His songs cover the whole gamut of human experience and are delivered with flair, wit, compassion and serious digital dexterity on guitar and banjo. Essentially a serious songwriter who has been known to raise more than the occasional eyebrow, glass, roof, chuckle and consciousness, he treats his own material with the same conviction that he brings to music from the Scottish tradition, believing both music forms to be inter-related and complimentary. He travels hither and yon singing songs of love, hate, loss, injustice, fear, outrage, bewilderment and Scotland!

Tours of Germany, Holland, Denmark, Sweden, Finland, The Middle East, Canada, and The Canary Islands, appearances at many festivals, - including Cambridge and Edinburgh and being invited to be Fairport Convention's special guest on their mammoth 30th anniversary tour of Britain have contributed to Fraser's reputation as being one of Scotland's furthest travelled and best loved musical ambassadors.

Fraser Nimmo sings The Road tae Dundee live for Radio Oxford at Fairport's Cropredy Convention in August 2019. You can see more videos of Fraser in action by going to the Videos page.

Filmed by Tony Ecclestone.
Fraser Nimmo sings The Pain of the Road live for Radio Oxford at Fairport's Cropredy Convention in August 2019. You can see more videos of Fraser in action by going to the Videos page. 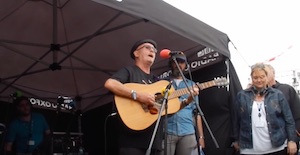 “Fraser Nimmo was a super opening act on one of our lengthy winter UK tours. Right from his opening song he had the audience in the palm of his hand and joining in on the choruses in true folk tradition. Lovely songs and banter and nice guitar playing too. If you get the chance to see him do.”
- Dave Pegg, Fairport Convention